Tabex contains Cytisine but what is it and where does it come from? treatment of smoking. The preparation is developed on the basis of the alkaloid Cytisine contained in the plant Cytisus laburnum (Golden Rain acacia).

The broad clinical studies carried out, show that the therapy with the preparation Tabex results in giving up smoking in more than 57% of the patients.

Cytisine possesses a structure and mechanism of action that are similar to those of nicotine, but it has much lower toxicity. Tabex manifests one of the best results to date for the group of preparations, intended for tobacco smoking therapy. Tabex is very well tolerated, and when applied in therapeutic doses, allows a gradual giving up of smoking without any side effects.

The total giving up of smoking should take place not later than the fifth day after the beginning of the therapy. Supplied in a package of 100 film tablets of 1.5 mg Citysine.

There is 1.5mg of pure natural cytisine per tablet of Tabex.

Join millions around the globe and give up smoking in a safe, natural and cost-effective way right now! Tabex tablets have been made in Bulgaria since the 1960's. 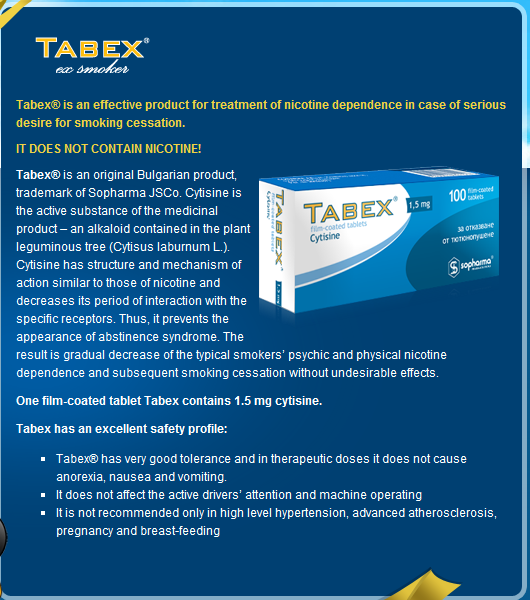